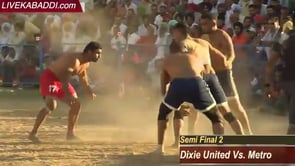 The second semi final was between Dixie Toronto United Kabaddi Club Vs. Metro Punjabi Sports Club. On paper Dixie was the heavier team, but Metro was well balanced and it showed. Metro beat Dixie United for the first time and advance to the Final Match.