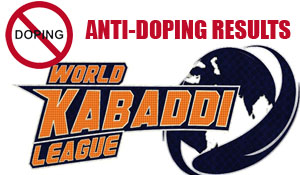 The Wave World Kabaddi League (Wave WKL), today announced the list of 23 players who were asserted to have committed anti-doping rule violations, either before the draft or during and out of competition tests in the WKL. Eleven players have been found to have violated the anti-doping regulations in the time since the start of the inaugural Wave WKL, according to the organisers.

A further 12 players were declared for adverse analytical findings by the WADA accredited laboratory, in the doping control out-of-competition tests at Ludhiana prior to the selection of the teams. The names of all 23 players will be publicly published shortly. The Wave WKL has in a historic move created history in sports by establishing a record of introducing stringent anti doping measures. It has conducted 464 doping control tests till the last set of matches held in Jalandhar.

Mr. Raman Raheja, Chief Executive Officer, World Kabaddi League said, “We had implemented doping control tests out-of-competition (OOC) as well as in-competitions (IC)”.In a stringent drive WKL conducted 191 doping control out-of-competition tests at Ludhiana prior to the selection of teams for the league. Out of them samples of 12 players were declared for adverse analytical findings by the WADA accredited laboratory. Their names will be publically published on the official website of WKL.

The Wave WKL commenced in-competition doping control tests from the inaugural league matches held in the United Kingdom (UK) from August 9, 2014. Thereafter WKL also implemented random out-of-competition tests to create a sense of responsibility and awareness among sportspersons that they could be tested anytime and anywhere.

The names of three other players, one from Out-of-Competition tests two from In-competition tests have not been declared intentionally as their cases are under notice period, but these names will also be announced after due process is completed.

The WKL CEO said that all results were managed in compliance with International Standards, respective players were given the opportunity to appear before the Anti-Doping Disciplinary Board, but many of the players waived off their right by not appearing before the board within the stipulated time period of 15 days.

The Wave WKL in accordance with WKL Anti-Doping Standard and WADA Code will impose necessary sanctions on these athletes. Mr. Raheja said that Wave WKL was in constant contact with WADA authorities and the details of athletes and respective adverse analytical findings have been shared with WADA Headquarters in Montreal, Canada.

Commenting on the findings and the announcement, Mr. Pargat Singh, Commissioner, World Kabaddi League stated, “Wave World Kabaddi league follows the World Anti-Doping Agency (WADA) objective ‘Play True’ and the doping control program developed for the World Kabaddi League (WKL) was athlete focused with the objective of providing confidence to athletes that they are competing on a ‘level playing field’ and to act as a deterrent to athletes and their support staff from competing unfairly and putting the athletes welfare at risk. Its secondary function was to test athletes to ensure that they are not competing whilst under the influence of performance enhancing substances or methods; and finally the program aimed to provide information relating to the doping control rules and procedures; and on the consequences of doping in Kabaddi.”